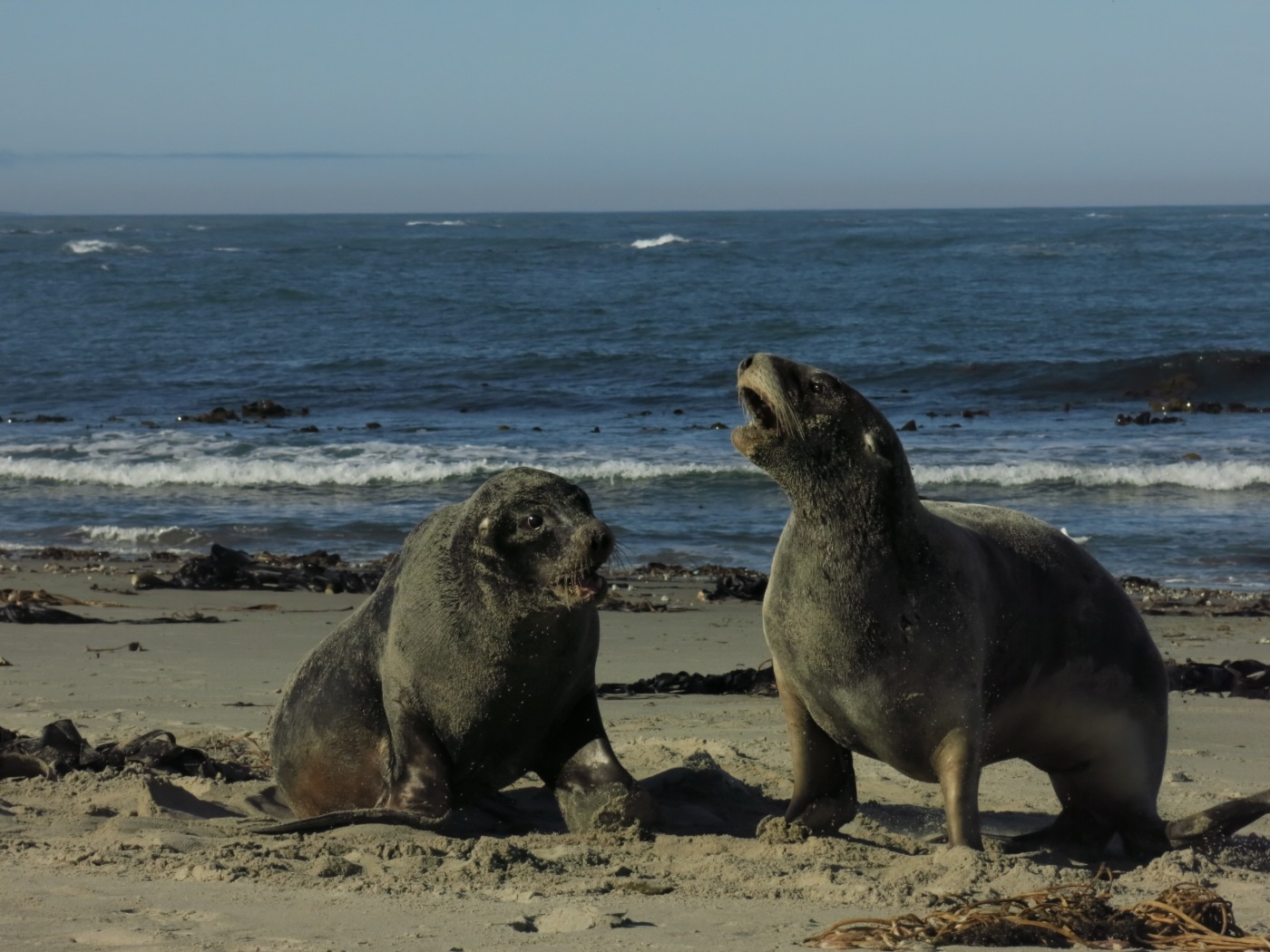 Our journey through South Island continues, as we drive through the Otago and Southland regions. These southern reaches of the country are brimming with stunning scenery and diverse flora and fauna to explore. Here’s some of what we experienced during this penultimate leg of our New Zealand road trip.

On the northern edge of Lake Wakatipu, with views of snow capped peaks across its dark waters, sits Queenstown. As a resort town, it has the look and feel of a European ski village. Wooden chalets, concrete hotels, hill top mansions, all face towards the spectacular views of the lake. We did not particularly enjoy our stay in this area but that’s down to personal taste. If you’re into luxury or interested in winter sports/adventure travel, I think it’s a fantastic spot. Our highlight was an extremely scenic drive along the banks of Wakatipu followed by a glorious day hike on the Routeburn track, in Mount Aspiring National Park.

Start of the Routeburn track

The Flatlands in the valley

The thing that really soured our experience of Queenstown was it’s hostility towards freedom camping for seemingly no reason other than maximising profits in the region. It is prohibited in the entire town so be warned. If you drive in after dark, like us, and miss the oddly placed signs, they will slap you with a $200 ticket that you can’t dispute. This, followed by a very unpleasant interaction with an extremely rude local in nearby Glenorchy, had us yelling “let’s get out of this damn town”. We raced towards Te Anau guided by the light of a magnificent full moon.

A Fiord/Fjord, in case you too didn’t know, is a ‘long narrow deep inlet of sea between high cliffs, typically formed by submergence of a glaciated valley’. Whilst super informative, the description doesn’t quite convey how stunning Fiorland is to behold, and no words could to do those sunsets justice! Check out our day in the life vlog and see some of the views for yourself on our journey to Milford Sound.

Our absolute favourite experience, possibly of the whole trip so far, was the Clifden Caves. Like all the best things, we stumbled upon this gem by following a sign on a whim. What we found was a labyrinth of tunnels and chambers. Their limestone walls were formed between 22-18 million years ago from the sedimented remains of ancient marine life, before being thrust above sea-level by tectonic movements. Once above ground, exposure to rainfall slowly carved out the elaborate system of ever changing passageways, allowing humans to explore their otherworldly beauty from within. 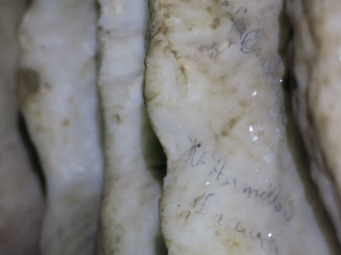 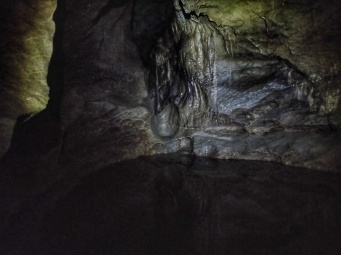 It took us just over and hour to crawl and edge our way through the eerie pitch black caves, at times, gripping for dear life as we traversed the perimeter of mysterious water-filled pools. It was exhilarating and we’d highly recommend to anyone who has the mobility and isn’t claustrophobic. Just remember to bring your head torch! Oh, for all those who feel the need to graffiti these magnificent structures, we beg you please think twice. The limestone is profoundly old, beautiful, shimmering, intricate, why ruin it with “Baz was ‘ere 2018”?

The King and Queen of Demolition World 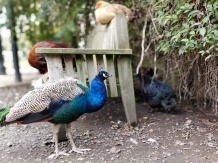 This guy woke us up!

Like a lot of “new” cities, Invercargill is flat, well organised and a little lacking in the historic charm we take for granted in Europe. We had a pleasant time here though and enjoyed a surreal trip to Demolition World, a strange post-apocalyptic shanty town staged entirely out of salvaged goods.

The boss waking from his slumber

Flanking the city on either side is the Southern Scenic route, which delivers endless beaches and ample opportunities to spot marine wildlife! We stopped at Waipapa Point where we found some beautiful Paua shells and admired the lighthouse before stumbling upon some slumbering sea lions. The massive and adorable creatures eventually woke up and treated us to an episode of Planet Earth, although we couldn’t figure out if they were playing or fighting without Attenborough’s commentary.

Named from the Gaelic term for Edinburgh and built on the hills of an extinct volcano, Dunedin is our favourite city of South Island. It’s full of quirk, with great bars and cafes and the vibrant street art scene injects plenty of colour. We were basically “stranded” here for a few days while we grappled with some technical difficulties, but we didn’t mind at all. The public library is a great spot and the city council has a friendly attitude to freedom campers. 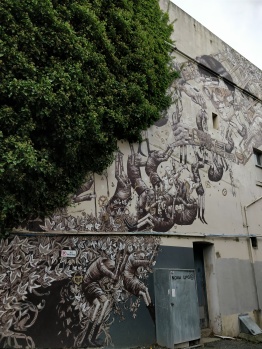 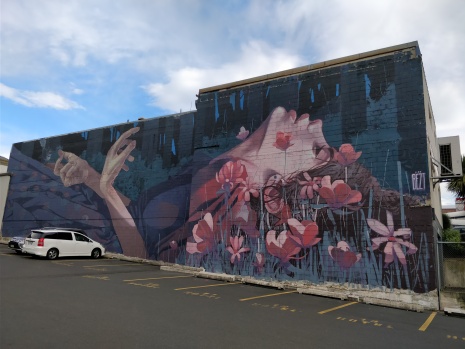 Protruding from the southern side of the city is the Otago Peninsula, a hot spot for marine life. We took advantage of this on a Little Blue Penguin tour run by the Royal Albatross Centre. We have zero regrets about spending the $35 each for this experience. The centre’s conservation efforts are certainly worth the donation. These utterly beguiling critters come to shore at dusk in little groups (called rafts) for what I can only assume was a party, given the insane raucous they made once hidden in the bushes. We would have gladly stayed all night to watch them!

As we near the end of our time in New Zealand, we’ve started to truly embrace the van life: relaxing for longer in places, cooking better meals and generally enjoying the minimalism and freedom of this life style. Come back next time to see how we spend our last week in this beautiful country.

Aaaaaand we're back! 7 months, 10 countries, many mountains, even more beaches, amazing people, stunning sunsets, stunning sunrises, surfing, snorkeling with turtles, high climbs and zip lines, volunteering with communities, trash collecting, rural home stays, motorbike tours, boat cruises, van life, a sprained ankle, a broken collar bone (both Corneliu 🤦), the occasional tears (Tara obviously 😂) and not forgetting the beers with friends old and new. . We had an amazing time, no regrets and can't wait for the next adventure. For now it's back to London and friends and family in my favourite season, the undeniably beautiful autumn (might take a while to get used to these temperatures though 😨). Thank you to everyone who made our trip unforgettable!
A Vietnamese family on their fishing boat near Ha Long Bay. This was the perfect place to end our trip and bid goodbye to the wonderful Vietnam.
The stunning Ha Long Bay our last amazing sunset of the trip!
Hà Giang Loop - Day 3: great highs often come with great lows. Our days on the loop were our favourite in Vietnam, and probably some of the best of the whole 7-month trip. What started as an awesome day took a sharp downturn when we came off the bike! Luckily we weren't going too fast but Corneliu broke his collar bone. What followed was 36 hours of uncertainty, uncomfortable transport, sleeplessness and hospitals before we were told that it'd all be fine. . Funnily enough everyone back home was more freaked out about the whole thing than we were. It was a shame it ended that way, but we don't regret doing the loop at all! Just be sure to stay focused when you're on the road!