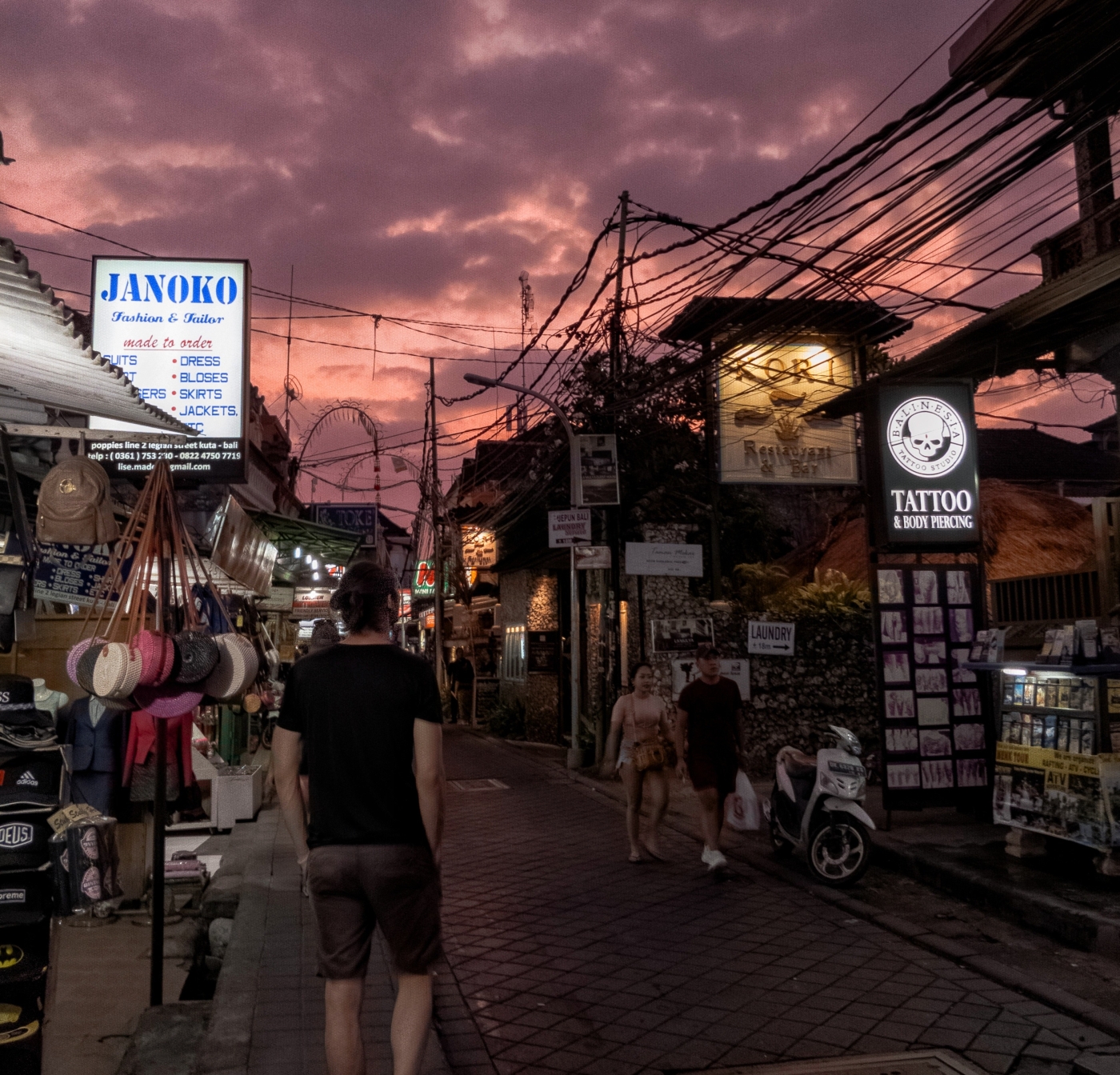 We began the South East Asia portion of our trip by fulfilling a rite of passage and getting thoroughly ripped off! After strolling confidently out of the Denpasar customs gate and bypassing a horde of cajoling taxi drivers, we were finally stopped by a young chap in a Batik-print button-down who quoted us IDR450k for the journey to our hotel. Having forgotten to familiarise ourselves with the exchange rate, a limp attempt at bartering  ensued before shaking on the “good for you, good for me” price of IDR400k. This turned out to be roughly £20, an extortionate amount for the 10-15 minute drive! Still, we couldn’t blame the guy for trying (for taxi rate advice see the bottom of the page). 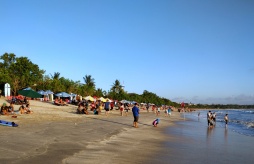 Kuta Beach on the busy southern side.

One of the many funny shops. 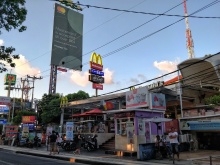 One of the many McDonalds.

Kuta gets a bad rap these days and I can totally see why many travellers are put off by it. It’s dirty, ram-packed and around every corner is a scam/tourist trap waiting for you. The narrow lanes are lined with shops selling the same cut-price gear. Every few steps brings a new assault of offers, such as invites to “massages” or, for Corneliu, Viagra. Errant motorbikes constantly get too close for comfort as they manoeuvre around the eternally congested roads. The multitude of mega resorts, McDonaldses, Starbuckses, etc., and the insane population density all detract from the authenticity of the place. Kuta is the definition of “too touristy” with a garbage strewn beach and all. 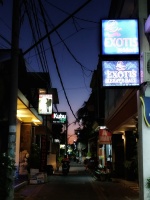 We couldn’t get over the evening sky here. 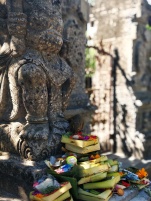 Shrine offerings getting raided by this cheeky squirrel. 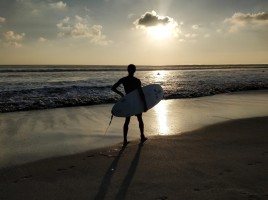 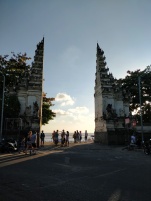 Gates to the beach.

Yet, despite all the pandemonium and the unmistakable sorrow of a paradise lost, I can’t help but feel a fondness for the place. Maybe it’s the cute little offerings scattered across the roads, the intricate Hindu architecture or the sweetness of the fresh pineapple juice – which tastes so much better than the imported fruits we get in Europe. Or perhaps it’s the way Balinese sky is transformed by the beautiful sunset hues. It’s hard to pinpoint, but there is just something immediately pleasing about arriving in this island town where anything goes. Every square inch of the place feels alive, everyone is hustling, and an enterprising spirit fills the air. Custodians, taxi-drivers, waiters, security guards, just about every local you meet is smiling and looking to start a conversation. It’s a stark contrast to the polite indifference we found whilst travelling in New Zealand  and Australia. 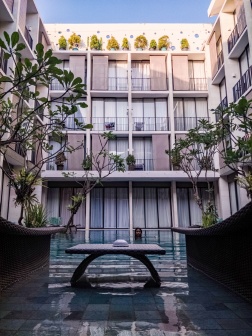 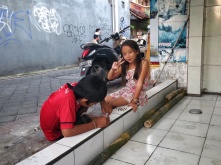 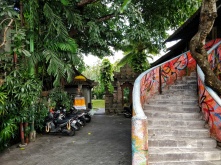 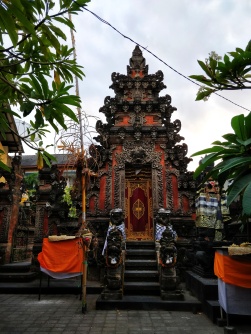 These ornate temples are everywhere!

We spent 4 days here relaxing in a relatively fancy pad, Kuta Terrace Hotel. At approximately £20 a night, it was cheaper than even the most basic Air BnB we had in NZ/Oz and came with the added bonus of a shaded swimming pool! A few languid days of sipping king coconuts whilst dipping in an out of the pool was exactly what we needed to acclimatise to our new surroundings and get some much needed planning/admin sorted. Most people come to Kuta for the surf and party scene. We forgoed these activities on this visit, instead spending our time perusing the shops, filling up on nasi goreng and walking the labyrinth of alleyways with a voyeuristic curiosity. 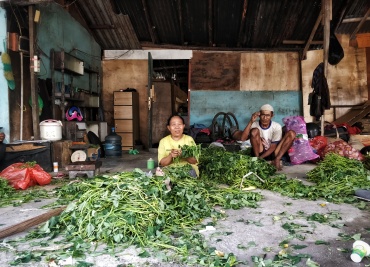 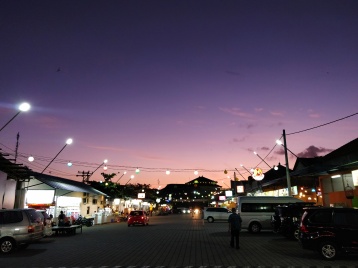 Kuta is a great gateway into Indonesia, and indeed South East Asia. However, if you aren’t looking for that hedonistic backpacker party scene, a couple of days is more than enough to check out the temples and enjoy the beach before moving on. Though most visitors concentrate on South Bali and the rice terraces of Ubud, the rest of the island has so much to offer. During our short time in the region we managed to visit the picturesque north eastern town Amed,  and volunteer on Nusa Penida. We were also lucky enough to reach neighbouring islands Lombok and Java. But, with the Indonesian archipelago containing more than 13,000 islands to explore, each with it’s own idiosyncratic blend of cultures, customs, dialects, histories and landscapes, we remain brimming with wanderlust for the rest of the country. Now that 30 days visas available on arrival for most nationalities, it’s easier than ever to visit the largest island nation on Earth. Just pick an island and book a flight, you won’t be disappointed!

The Balinese taxi mafia has successfully managed to suppress Grab (who acquired Uber in SEA) in the vicinity of Denpasar airport. You can still try and request a pick-up but don’t be surprised if they private message you asking for huge price increases or never show up. If you haven’t pre-arranged for your hotel to pick you up, then one of the insistent, shirted taxi drivers is your only real option.

They will start ridiculously high, so make sure you already know the exchange rate before you start bartering. At the time of writing 18,804.63IDR = 1GBP, based on this exchange rate a reasonable price to Kuta is between 90,000-150,000IDR, though you’ll have to negotiate hard to get this. An even better option is to demand a metered Bluebird taxi but this might not always be offered to you. Teaming up with another group of travellers and splitting the cost is also a good tactic if you aren’t comfortable with aggressive haggling.

If you’re travelling in Indonesia for a while, you might want to have access to mobile data. You can pick up SIM cards from many of the little shops, especially along Jalan Legian where prices are always negotiable. The major network providers are Telkomsel, XL, Indosat and 3, and they have variable coverage across the different islands. It’s a good idea to download OpenSignal before you buy to check which network has best coverage in the places you plan to visit.

Telkomsel has best coverage so expect to pay more for these cards. We chose XL which seems to be catching up fast in terms of coverage and speed. The 8GB, 30 day SIM we got cost 180,000IDR which works out at about £10.

You’d think buying a SIM would be the end of the story, but after 21 days our SIM randomly stopped working. Assuming we’d somehow used up 8GB, despite our phones saying we’d only used ~3.5GB, we bought a new, identical card from a phone shop in Amed for 40,000IDR. Recent legislation requires all Indonesian SIM cards to be registered with an ID. It seems that our original SIM stopped working once the network detected that it was unregistered. The new 2018 card wouldn’t work at all out of the box. Foreigners can register a card with a passport, but the online forms failed and we couldn’t find anywhere to do it with the language barrier. In the end our very kind homestay host in Java registered the card with his National ID details.

TL;DR – Make sure your SIM is registered before you buy. Alternatively, buy a 3 pay-as-you-go SIM from the UK + a 30 day add-on bundle.

Watch out for these scratch card give-aways around Kuta Beach. The representative will desperately try to convince you to hop in their car to collect your prize from the Karma Group Hotel. It isn’t exactly a scam because the prizes are legit and technically commitment free. In return, you will be forced to endure at least two hours of harassment and aggressive sales pitches once you arrive at the hotel. Whether this is worth it depends on how much you want a GoPro/$100/t-shirt. We politely declined because we didn’t like the idea of getting in a random stranger’s car for a free gift – it sounded too good to be true. Looking it up later, we found reports of people being kept at the hotel for 6 hours before finally getting their prize! I do feel bad for the scratch card sellers who lose out on the commission if you don’t go, but I really loathe this type of tourist trap.