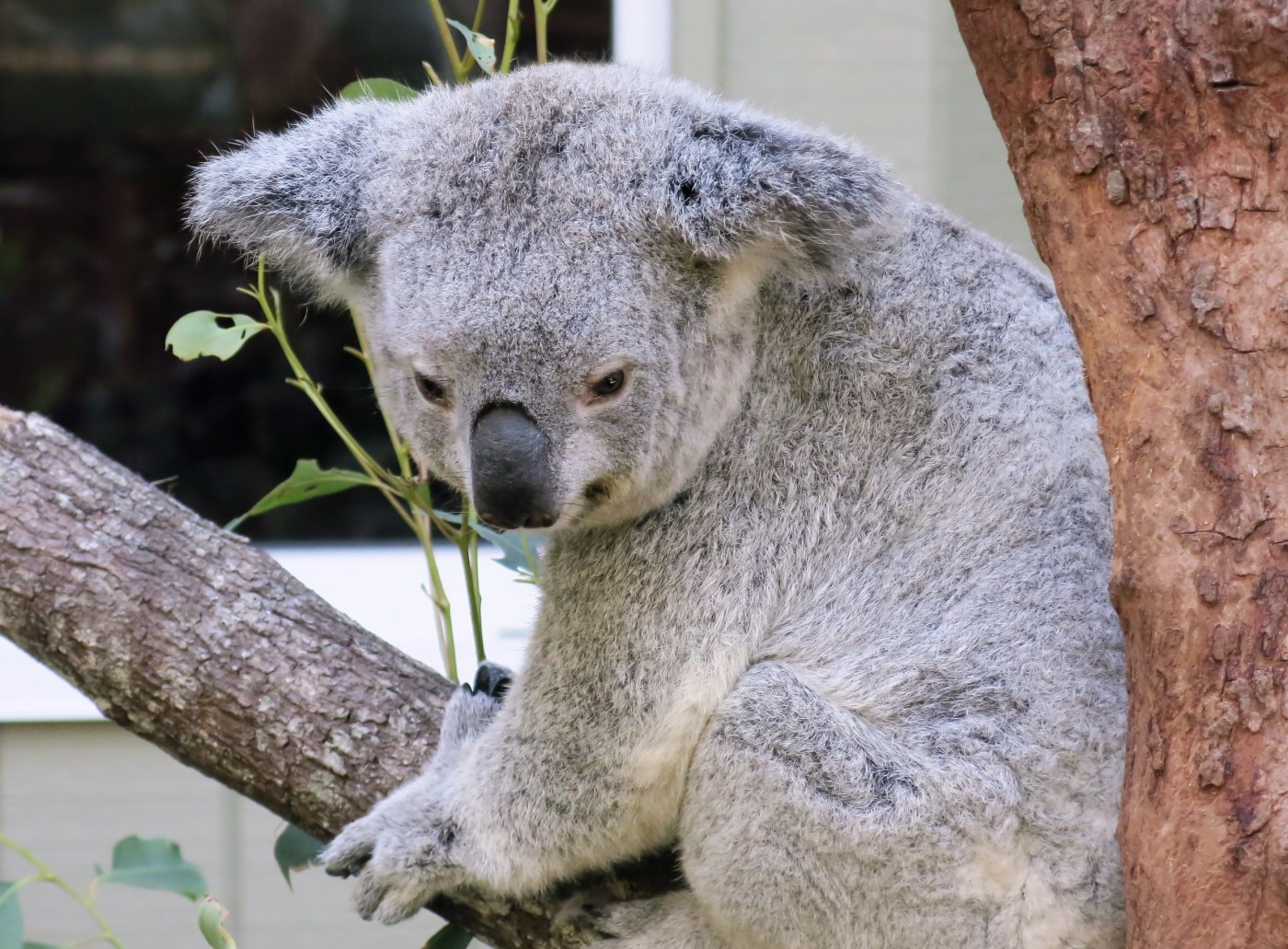 To wrap up our time in Australia we made a short trip to Brisbane, the state capital of Queensland. Thinking it’d be an adventure we decided to take a 14-hour overnight train from Sydney. If you were thinking of doing the same, think again! It will leave you brain dead after negligible sleep and arrives too early to do anything. We ended up snoozing in the station food court until McDonalds opened for breakfast service. 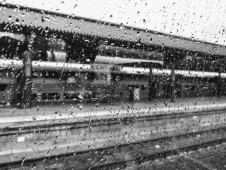 The rain came just as we said bye to Sydney 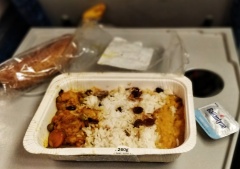 Before (ignorance is bliss)

Despite the hours lost in transit we managed to pack a surprising amount into a two-day trip, including a visit to some famous Australian marsupials.

Powered by hash browns and black coffee we eventually ventured out into the glorious sunshine of Brisbane at around 7am. The wonderful outdoor space of Roma Street Reserve, home to exotic birds and sunbathing lizards, provided the perfect welcome, allowing us to kill time before check-in. 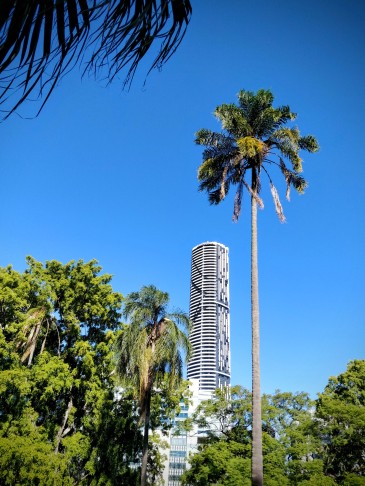 Just check out that blue sky! 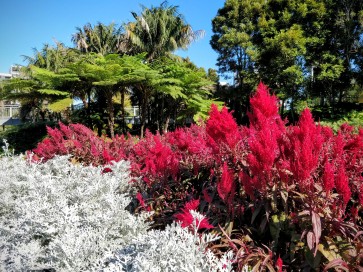 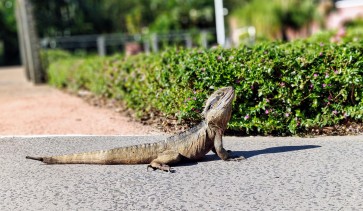 After freshening up we spent the rest of our day/evening walking the city. Our first stop was to meet an old London office-buddy, Nonie, who recently moved back to Brisbane. We started with a dose of caffeine and a beer at the quaint, colonially styled Regatta Hotel. Nonie had graciously planned quite the evening tour to showcase Brisbane for us. Once lubricated, the first step was to catch the river ferry to the South Bank precinct. We highly recommend the ferry if you want to get a quick, drive-by impression of the city’s architecture and scale. 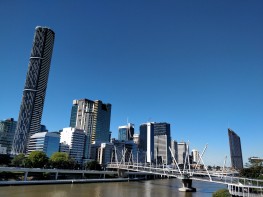 Kurilpa pedestrian bridge and the CBD 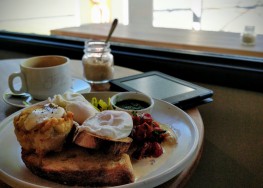 Breakfast on day 2 was much better than McDonald’s on day 1. 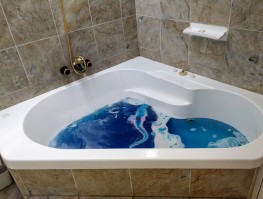 Our Air BnB had the most indulgent bath ever! 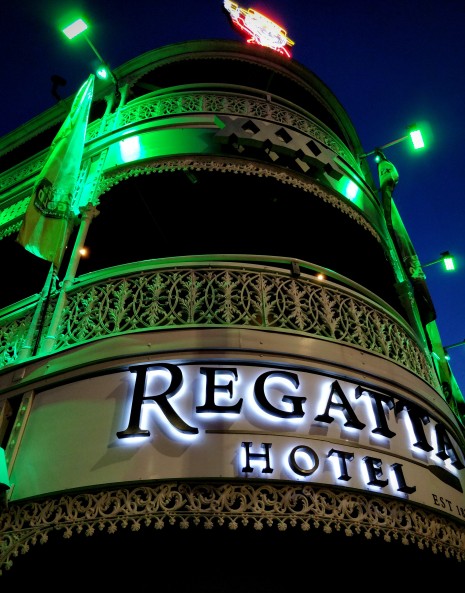 The South Bank proved to be a must see spot, coming complete with an artificial inner city beach. The Arbour, a galvanised steal frame embellished by flowering creepers, gives the impression of walking through the rib cage of a colossal dinosaur skeleton. This area is also home to the Queensland Museum, Art Gallery and Brisbane’s slightly smaller reproduction of the London Eye, so there’s plenty to keep you entertained.

Our final stop of the lightning-speed tour was to join a group of Nonie’s colleagues at Kangaroo Point.  This huge outdoor climbing wall is the remnant of early mining work and is conveniently situated above a long green space by the riverside. Lacking the equipment for climbing, we instead enjoyed a BBQ and tried our hand at slack-lining (with varying success) before taking the stairs to the top of the wall. By this time, our sleep deprivation had truly caught up with us but we were still able to admire the panoramic views over the city before calling it a night.

We couldn’t leave Australia without seeing a koala or wallaby up close, so this was the mission for our second and last day.  Brisbane had two options for this: the close-ish Lone Pine Sanctuary and the more suburban Daisy Hill Koala Centre. Both centres focus on conservation and education but they offer very different experiences. Lone Pine provides a petting-zoo type experience for $36, allowing you to cuddle the koalas and hand feed kangaroos. In contrast, Daisy Hill is free to enter and set in forested conservation grounds. Here you can walk amongst wild wallabies before observing the koala at arm’s length in the rehabilitation area. After reading many testimonials we weren’t sure how comfortable we were with the Lone Pine option, which some visitors reported as feeling slightly exploitative, so we opted for Daisy Hill.

It’s a slight mission to get there by public transport, requiring about an hour and at least two buses depending on where you start ($17 return ticket to zone 3). From South Bank Bus Terminal hop on the 555 towards Springwood, followed by the 574 from Fitzgerald Avenue. Alight at Kinloch Road and enjoy a pleasant 15 minute walk to the sanctuary. It’s a good idea to pick up a picnic lunch from the Coles next to Fitzgerald Avenue if you want to spend the day on the park grounds. 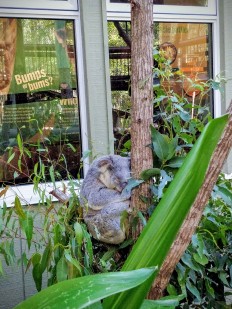 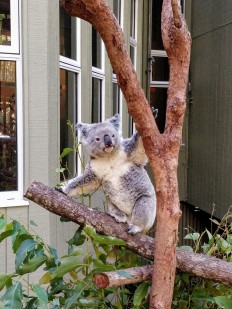 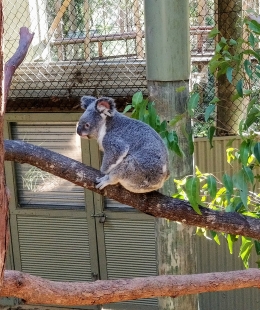 The effort of the commute is well worth it as you will absolutely fall in love with these dozy marsupials the second you lay eyes on them. Upon entering you walk straight into an open enclosure that houses the centre’s females, which are recovering from particularly bad bouts of Chlamydia. Sadly, this bacterial infection is epidemic and wreaking havoc amongst wild koala populations. The three fluff-balls, Jannico, Molly, and Kyra, were curled up tight, fast asleep and unimaginably adorable – seriously you will be grinning from ear to ear. It’s not unusual to find them sleeping as koalas can spend up to 22 hours a day in this state. They wake up sporadically to feed on eucalyptus leaves, the sole constituent of their diet. Jannico and Molly graced us with a few minutes of action each, to rustle about, pose and show off their agility on the branches before deciding more sleep was in order! 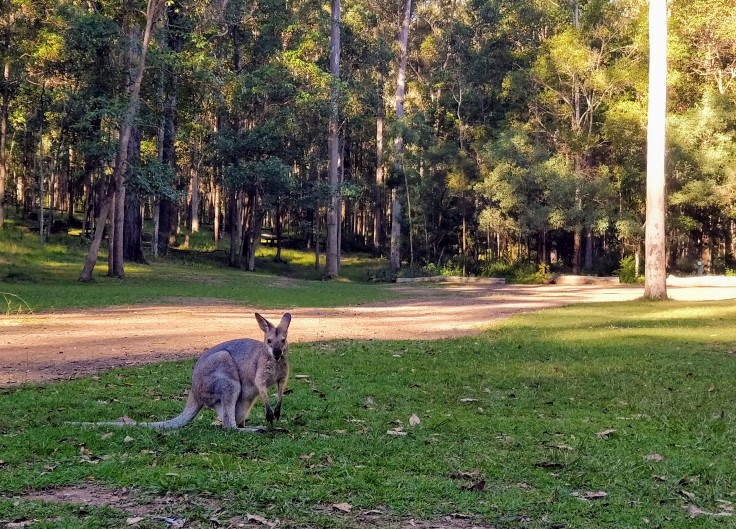 As you move through the centre you can also see a male koala and learn all about the species’ numerous physical adaptations, habitat, social structure, and population threats. But that’s just the tip of the iceberg of what’s on offer at Daisy Hill. At the top of the centre there is a beehive built by the World’s smallest species. The fascinating miniatures don’t have stings so you can get up close and admire them. Outside there are plenty picnic tables and walking tracks frequented by grazing wallabies, and an abundance of birds, including Kookaburra. Basically, this place has everything you need for a great day out.

Although we had originally wanted to check out the red desert heart of Australia in Alice Springs or visit the northern tropical region of Cairns, we instead decided to end our time here early and head to Indonesia.

Several factors contributed to this decision. Mainly, it was going to be super expensive to visit Alice Springs. Camper van relocation was the cheapest option but it still would have set us back $300-$400 in fuel costs one way. With only two drivers it also might not have been particularly fun to complete 2600km in just 4 days. If you have a slightly larger group (maybe 4 is ideal) then van relocation might be a great budget option, so check out coseats and imoova to see what’s available.

In the end we were feeling this undeniable draw to get away from big urbanised cities, and near a nice tropical beach. It just made more sense to skip Cairns which would be way more expensive and head straight to Bali. So join us next time as the South East Asia portion of our adventure kicks off!