Sydney, the most populated settlement in Oceania, seems to sprawl endlessly across all directions of the Parramatta estuary. Yet despite its sheer scale, the city has the ambling, relaxed atmosphere of a much smaller seaside town. During our eight-day visit we gladly assimilated to this chilled-out pace of life, taking time to enjoy the nearby coast, cruise the busy harbour, eat exquisite meals and admire the iconic landmarks.

Apparently we didn’t take a single picture with Ben…

Hiruni, another of Tara’s many cousins, generously hosted us for the week. Having resided in Sydney for three years, she was keen to endear us to her new home. She recruited her friend Ben, a true Sydneysider born and raised in this enormous city, to give us a grand tour. On our first night they took us to Circular Quay to admire the Sydney Harbour Bridge and Opera House. Hiruni was determined that we appreciate the magnificence of the bridge from every angle, lamenting that her parents had found it underwhelming during their visit. Of course, we immediately proceeded to mock the bridge, claiming it was overrated. Looking back at the photographs of our visit, it became apparent that Hiru got her way. We did indeed experience the Harbour Bridge in every conceivable way. From the left, the right, the north bank, south bank, passing under in a ferry, over in a bus, and finally running across it in a haste to catch the a blood Moon hanging over the Opera House. Clearly this revolutionary feat of engineering has an undeniable presence. 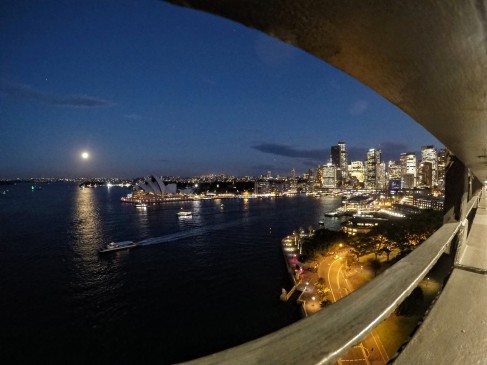 Apparently, we can’t get enough of walking as this was our main activity for the week. One day was spent dallying along the renowned Bondi to Coogee coastal track – although we did it in the reverse direction. This is a great one for watching the waves, surfers and, maybe in the warmer months, taking a dip in the public pool. Another beautiful walk was taken through Wendy’s Secret Garden which quickly became our favourite place in Sydney. This peaceful oasis fills your nostrils with the fragrances of local flora whilst you admire the stunning views across the river. It’s full of wonderful surprises. For example, we turned a corner to find a Kookaburra perched a metre from us! 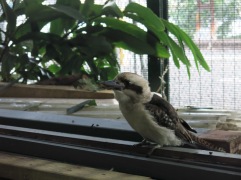 Even the natives love that bridge!

At the weekend, we braved the congestion to visit the Royal National Park. ‘The bush’, as Ben referred to it, is strikingly different to the landscapes we’d seen in other parts of the world; composed mainly of gum trees (eucalyptus) and parched looking shrubbery rooted in  orange-red sand. We took the coastal walk to the pristine Wedding Cake Rock, a white structure resembling sheet icing. Admittedly, it was a little underwhelming but the route there was full of intriguing geological formations against panoramic views of the horizon. While we stopped for our lunch picnic we were fortunate enough to spot the spray from a whale’s blowholes a few miles out from the shore. 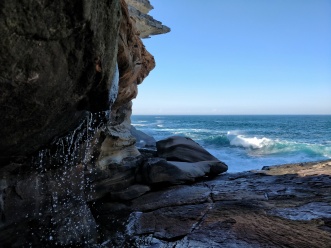 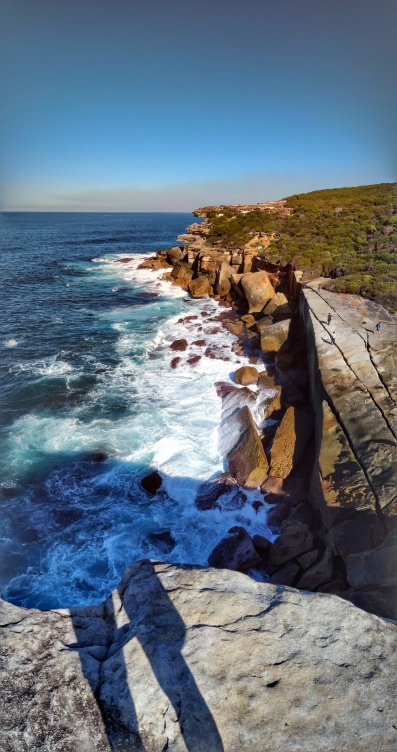 By happenstance, our arrival in Sydney coincided with the beginning of Vivid 2018 so our evenings were spent doing even more walking! This Festival of Lights sees the city transformed by a series of colourful and dynamic luminary installations. This year  celebrated innovative ideas within the tech, art and design industries around the central theme of environment. We witnessed the sails of the Opera House transformed into leaves, glowing butterfly cocoons, orchards of LED trees and many other magical displays. 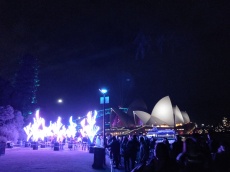 Besides walking, our other main activity was eating. We’ve never been short of culinary delights in London but some of the best meals either of us have ever had were during those eight days in Sydney! With a cafe or restaurant every few yards, you’re never far from a good meal. All that competition breeds the creativity that makes this place a paradise for all diners but, as vegetarians, we were particularly impressed with the variety and ingenuity of menu items. For example, Pablo and Rusty’s in the heart of the CBD delighted our taste buds with their delicately balanced lunch plates. Bodhi in Hyde Park served impressive Asian themed vegan food alongside an extensive cocktail menu.

Sours made with aquafaba at Bodhi Restaurant 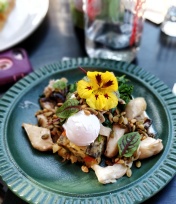 Brunch at The Grounds 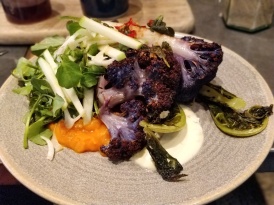 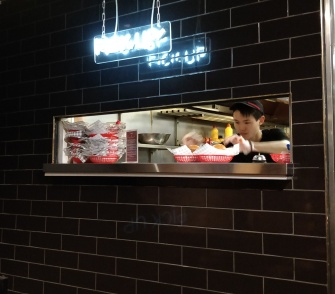 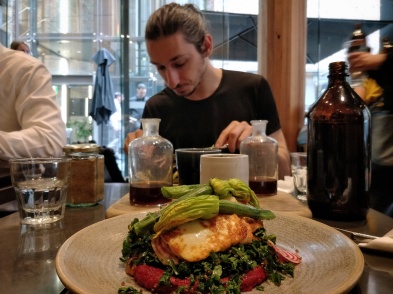 The Grounds of Alexandria serves excellent brunch in a memorable setting. Every eye-catching inch of this former industrial car park has been transformed into something picturesque. It comes complete with the most adorable pig, the macabrely named Kevin Bacon, who we hope isn’t fated for the menu! This is the type of place you could easily lose an entire afternoon in, drinking elaborate juices, oblivious to the passing of time. 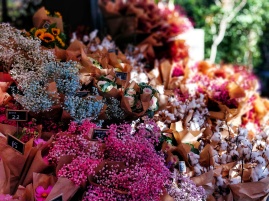 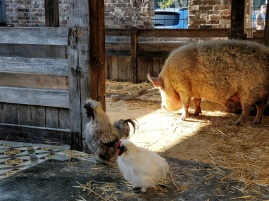 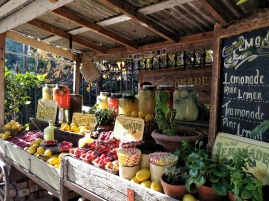 It wasn’t all flower-topped hipster food and fine dining though. Before Sydney, we believed that the ultimate, most glutinous burger topper was the humble hash brown. That was before the 4 Ounces burger joint opened our eyes to The ASAP which is adorned with a bread-crumbed, deep-fried, truffle-oiled macaroni and cheese patti – anyone getting hungry? I could go on, but I think it’s best to spare you from a description of every single meal we consumed. It suffices to say, if you love food then you must visit this city!

1. Get an Opal card. Unlike Melbourne, Sydney’s travel cards are freely obtained at station information desks. You can register it to the phone app and easily top up by card. It will automatically apply discounts to your trips. For example, after 8 completed journeys, your transits will be half price for the rest of the week.

2. If you have just one day in the city we recommend this mammoth route.

Start at Hyde Park, walk amongst the historic buildings like the Town Hall and the high rises of the CBD. This area is also great for brunch and shopping – check the beautiful Victoria arcade building, even if you don’t want to buy anything. 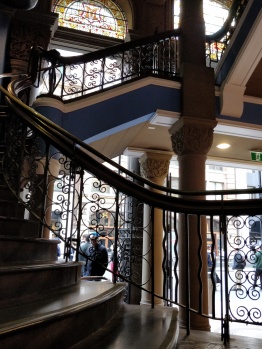 Next head to Darling Harbour where you can check out the exhibition centre, or Maritime Museum. If you’re tired catch a ferry straight to Circular Quay. Otherwise, we recommend continuing through the Barangaroo Reserve. Apparently, this infantile district was built just three years ago for the sole purpose of bypassing Sydney’s bar lockout laws but they went all out adding a very nice green space. When you exit the park you will be a short distance to the west of the Harbour Bridge, which you can pass under on the way to Circular Quay. Here you’ll find the famous Opera House waiting for an obligatory Sydney holiday snap. You can either end your walk here, exploring the Royal Botanical Garden, or you can catch a ferry for roughly $7 to Watson’s Bay where you can look back from the coastal cliffs to admire the city skyline.

3. The Town Hall Library. This tiny little spot is perfect for getting some work or admin sorted. Its free, equipped with desks that have power sockets, reliable internet and an adjoining cafe.